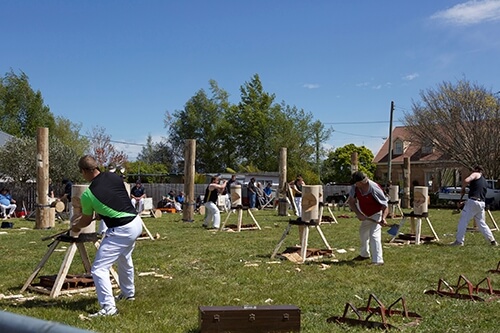 The Longford Show, which prides itself on being a family show, is considered one of the best one day shows in Tasmania. The attendance over the past few years has been approximately seven to eight thousand people.

You will find all the usual show attractions and all the side show alley rides, games and face-painting at the Longford Show.

The home industries and school sections are always very popular, and there is always a great display of artwork from the local schools, as well as the adult art and craft and cooking attractions.

The first Longford Show was held on the 4th November 1857 behind the Blenheim Inn, Marlborough Street Longford, but was moved to an autumn show in 1858, which featured exhibitions of ports, seeds and other colonial products. Admission was 1 shilling.

The first President of the then Northern Agricultural Society was Mr Thomas Reibey, who built Entally House.

The Show has been held ever year since with the exception of two years, 1943 and 1944 during the second world war and one in 1950 due to an epidemic. In 2006 the Longford Show Society celebrated its 150th anniversary, with a very special and successful show, which finished with a great fireworks display.

The show grounds are owned by the Longford Show Society, many volunteer hours have been spent on improvements and maintenance to the grounds and buildings. In 1861 a grant was made to the Society of most of the area now occupied. The remaining area has either been purchased or gifted to the Society.
Over the years new pavilions have been built and older ones replaced, so that at the present time most of the buildings are very good condition. The horse, all feathered and kennel facilities have recently undergone improvements and are now excellent venues.

In 2002 the name of the Society was changed from the Northern Agricultural Society Inc to the Longford Show Society Inc.